The B Sides Project

This past summer, the summer of 2016, two of our local SLIS students made sure that they did not waste their summer vacations. We wanted to make sure we captured a little bit of their experiences.Erica Knapp spent her summer working at the Franklin D. Roosevelt Presidential Library and Museum in Hyde Park, NY. Kara Wentworth spent her summer break working at the National Park Service Headquarters in Washington D.C. in the Tribal Relations and American Cultures department. They were both selected for their positions from an initial pool of applicants from across the country.

In this episode we speak to Erica and Kara about their experience delving into special collections work at the federal level, getting to know individuals through the intimate work of collection processing.

That summer, they also participated in special events, learned about the workflow and logistics of a functioning national archives, gained a unique understanding of national archive and federal agency standards, and became familiar with the responsibilities of an archivist at the federal level. 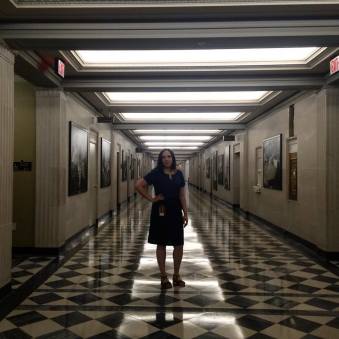 Kara standing in the Main Interior Building, the headquarters of the United States Department of the Interior, located in Washington, D.C.

“I was working in a building with a bunch of anthropologists. I processed a 100-square-foot collection for the chief ethnographer of the Park Service from 1978 to early 2000. They wanted to get an archivist in to go through it [the collection] because they weren’t sure how much of it was personal and had to be removed and redacted. [The job] really appealed to me because I wanted to get an understanding, a working knowledge, of the National archive standard.” -Kara Wentworth, 2016

Rebekah Walker, a Master’s degree candidate in the School of Library and Information Science at the University of Iowa, speaks to us about her summer interning at the National September 11th Memorial & Museum, located at the World Trade Center site in New York City.

A lifetime lover of museums, Bekah saw an opportunity to spend her last summer of freedom working in an unforgettable location, and she took it.

“I think that my specific feelings and passion about that museum helped separate my application.” -Bekah Walker, 2016

In this episode, Bekah discusses her experience applying for summer internships, her duties on the job, and the power of objects and museums to bring people around the world together.

“They say that the museum is just as much about 9/12 as it is about 9/11. It’s about how society has changed as a result of the attacks[…], so they really do try to relate the museum’s exhibitions to other things that are happening.”  -Bekah Walker, 2016

This summer, Bekah wrote a talk called Letters from Ground Zero. She gave the talk internally in August, but this coming spring she will return to New York to deliver it to the public.

“Everyone knows what it’s like to get a piece of mail, to get it from someone in your family. You see mail around and most people don’t really think about it because it’s so commonplace. But in this case it really represents something that is more meaningful and could form a deep connection between people.”  -Bekah Walker, 2016