The B Sides Project

In the midst of a divided society and a controversial political climate, what role do libraries play, and what responsibilities do librarians have to their patrons and collections? In this episode, we chat with Bekah Walker, John Fifield, and Alonso Avila, members of the University of Iowa’s Librarians for Social Justice group, about what social justice is and what it should look like within the library profession and among evolving community values.

“There’s a difference between neutrality and equality, and I think that’s something we need to look at as librarians. […] We as librarians have to hold ourselves accountable to upholding these values of equality.” -John Fifield, 2016

“You shouldn’t have to be neutral and not be advocating for the people that don’t have access to the things that other people do.” -Bekah Walker, 2016

“Through that [the election] people have started to become more aware and realize that we need to work towards building those bridges between communities that we may not have had contacted or connected with previously. So this is pushing us into areas that we need to be in, in order to start affecting change.” -Alonso Avila, 2016

Bekah, John, and Alonso also update us on the current activities of the Librarians for Social Justice group. On an ongoing basis, group members volunteer at the Anchor Center, which  is a prison transitional facility in Cedar Rapids.

In addition, the Librarians for Social Justice group will also hold their annual fundraiser, the Book Brunch, from 10am-12pm on Saturday December 3rd, at Public Space One in Iowa City, Iowa. For $5, attendees will receive a delicious brunch and have the opportunity to participate in a silent auction. Donations of books and crafts prizes for the silent auction will be accepted until Friday December 2nd. Proceeds of the silent auction and the breakfast will benefit The Lisa Libraries. We hope to see you there!

If you have questions about the Librarians for Social Justice group, their fundraiser, or are interested in joining their email list, you can contact them at libs.social.justice@gmail.com. 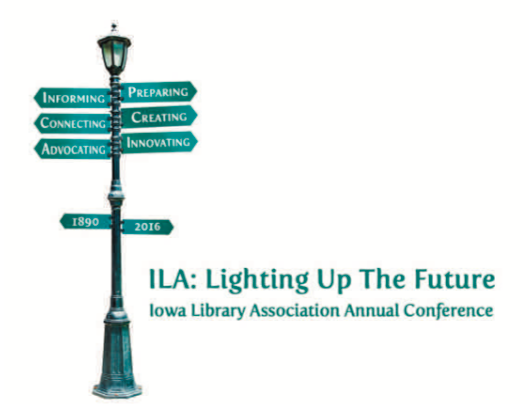 For this episode of B Sides, we meet with a couple University of Iowa School of Library and Information Science students who attended the 2016 Iowa Library Association Conference, which was held in Dubuque, Iowa in October.

The ILA Annual Conference is “a unique opportunity to engage with our colleagues from around the state, participate in and glean new ideas from conference sessions, and build and broaden our professional expertise.” (ILA 2016 Conference Program)

Second year students Laura Sauser and Shari Neal share with us why they decided to go to the conference and why they recommend others attend.

“For me, coming to library school is looking at a career change for myself. I’m going to school and getting the foundational classes; I’m also working at a public library. We walked in with some technical expertise and this [conference] made it more real-life.” -Laura Sauser, 2016

For Shari and Laura, the ILA conference was a opportunity to practice advocacy and build networks with potential future colleagues and employers. It was also an opportunity for them to learn about current issues and glean inspiration from practicing librarians throughout the state; inspiration they could potentially walk away and immediately use in their own jobs.

“It’s interesting to know what the issues, and what’s coming up…what’s trending in libraries. […] She [the speaker from St. Ambrose) talked about how to educate undergraduates to handle archives and primary sources. It was a CSI course that she had set up with artifacts and crimes [that had been committed unto them].” -Shari Neal, 2016